Attending a rave can be an overwhelming sensory experience, even if you’re sober. That’s by design – the intent of most parties is to transport dancers and music lovers to another world for the 12 hours that they’ll spend enveloped in smoke, lights, and churning bass. Even the most budget-conscious raves (and I attended, and performed at, more than a few of those when I was in the scene) do their best to build a world that transcends the typically humble surroundings of a club, warehouse, or outdoor forest.

Joe Ng and Josh Perez did an excellent job of translating that energy and passion to the page in Code 45. Even in the absence of music or movement, the rave scenes that the two collaborated on are pulsating with the collective power of hundreds of people moving together as one.
Part of this was drawn from Josh’s own experiences in the rave scene in Texas, while other elements were taken from the more popular conception of what these parties are like.

That latter point is important: rather than make the tunnel raves in Code 45 a documentary of the early 2000s dance experience, it was more important to use a common visual language that would be able to translate as many readers as possible into the realm that we had created, and allow them to feel like they were right there beside Vanessa and the rest of the crew while the Technics turned.

Anyone reading these pages who was there partying in Montreal in that particular era will easily recognize the elements we built upon, but again, as with our approach to how the Metro system functions here in Montreal, the most important aspect of Code 45 is the story, and the characters within.
We’ve made a concerted effort to match the reality of the times and setting as much as possible throughout the book, but it’s all in support of the narrative and how Vanessa, Nikki, Pierre-Yves, and the rest of the crew move through it.

Code 45 Issues #1-3 are currently available via Kickstarter at www.code-45.com. 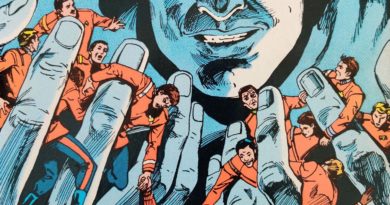 Why Would Someone Blog About Every Star Trek DC Comics Issue? #5 – Mortal Gods

Why Would Someone Blog About Every DC Comics Star Trek Issue? #1 – The Wormhole Connection

Anatomy Of a Code 45 Panel

48 Hours To Go In The Code 45 Kickstarter Campaign!

How To Become A Character In Code 45