We’re getting close to the end of the Code 45 story, with the second-to-last installment arriving in comic book shops today, October 19! This issue shows just how far our hero Vanessa will go to solve the mystery of Montreal’s metro dragons—and what she’ll do to help save the life of a friend.

Honestly, I feel lucky that Issue 4 managed to make it onto shelves at all, given that publisher Scout Comics, which is based in Ft. Myers, Florida, had its printer severely damaged by Hurricane Ian. Picture massive reams of paper soaked by torrential rains, and then throw in the on-going paper shortage that’s affecting the entire comic book industry, and you’ve got an idea of how fortunate it was that Code 45 slipped out to the distributor just in time.

Because of the funky timing brought on by publishing delays and catastrophic weather, it looks like the final Code 45 chapter will be reaching comic book stores fairly soon. November 2 is the current on-sale date for Code 45 #5, which wraps up the saga for Vanessa, Nikki, and the rest of the Montreal metro crew.

If you missed out on the retail editions of Code 45, you can still order them from your favorite comic book shop, or snag them directly from Scout Comics, including Josh’s webstore exclusive cover for Issue #1.

If you’re in Montreal, you can head over to Crossover Comics in St-Henri, which currently has Issue #1 and #2 in stock.

Click here to read the first 8 pages of Code 45 for free!

Thank You So Very Much 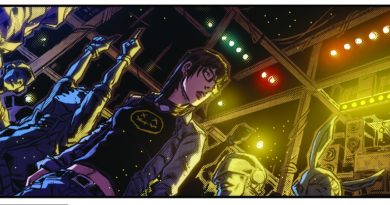 Subscription Fatigue Is The Least Of Your Future Car-Buying Worries

How Close Did The World Come To A V12/V16 Cadillac Escalade?

Why Would Someone Blog About Every Star Trek DC Comics Issue? #13 – Masquerade!